Dream of a Drying Shed
you tell me your story

how in the early spring evening, already dark,
wind lashing the coast, rain pouring onto the front deck of your house,
(that front door long since abandoned for access in face of the teeth
of that westerly, from north,
from the south, and sometimes from the pure west)
you heard a knock at the back door (the door that could be safely opened)
and when you answered,
there in the dark stood your neighbour with her two kids,
each tugging at a hand

what had happened to her washing she wanted to know
and you were able to bring it to her,
saved from the rain,
some of the kids’ clothes for school in the morning
a little crusted with the salt that flies in the air,
because you had known she was working late and then she would have the kids
to collect and the drive home and the rain had begun
and what then of the clothes for school in the morning?

no need to cut a long story short
because you had been a good neighbour and you had seen
her story as yours, you had rescued the washing
and now as you stood in the doorway you were together something of a we
as she said, “Thanks,” and “I guessed you would have” and
“Thanks again” and “Okay kids, we’re off – come on, you scruffs!”
and you watch the three of them disappear round the side of the house
back into the streaming wind and rain with their bundles of washing
clutched in several plastic bags
and even when they were gone together and you remained
still the we of you and she and them lingered
and what we is that we?
as we live in pronouns
immersed in their shifts
you are you and she is a she
then you are we
and later still you might all be a they
immersed in and tossed by pronouns
in their windy doorways

but your story was not only
a tale of four pronouns
it was also a tale of a vision you had
at that moment as they departed with the rescued washing
you said to yourself
“We” – and you said it –
“We might build a drying shed in the backyard
and a little gate in the fence so we might come and go
and fetch our warm dry washing from the tall shed
with its walls of glass and its roof of glass
and the high bars from which to hang sheets
and the low bars from which to hang smalls and hangers for shirts
and a way to reach up easily, a ladder or a stool with steps
all that warmth inside while the rain did its fair old lashing
and the wind its fair old whipping
and so we might and so we might . . .”

the dream came from action, and behind the dream of the shed
lay the dream of a we
the stitching together of the quilt of ourselves
the quick kindly thought followed by the quick gathering
in the bluster as the sheets and towels
and t shirts wrapped themselves round your face 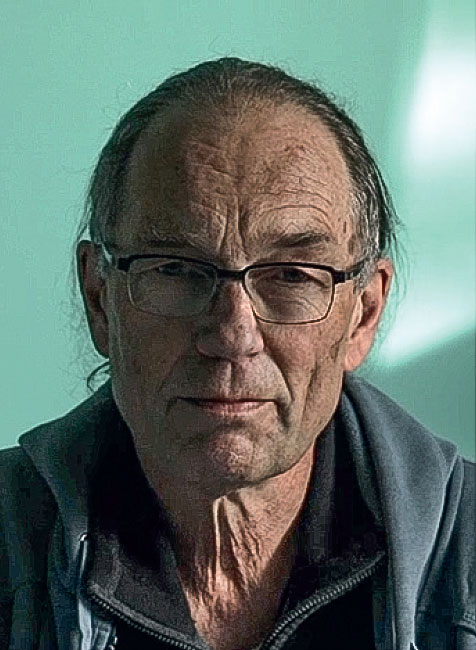 Murray Edmond Born in 1949 in Kirikiriroa and grew up there. Most recent book of poetry, Back Before You Know (Compound Press, 2019), consists of two narrative poems set kei roto i te rohe o Waikato: The Ballad of Jonas Bones is a 19th C tale of settler skullduggery; The Fancier Pigeon is a 20th C romance that takes us to Australia and back to Kirikiriroa.